Poker has a problem.
Short-Deck is the answer.
Also known as, Triton Hold’em, Short-Deck has its roots in Asia, where successful businessmen, and poker lovers, Paul Phua and Richard Yong, experimented by removing a few cards from the standard 52-card deck, increasing the likelihood of strong pre-flop hands.
Out went the 2s.
Then the 3s.
Then the 4s.
Finally, the 5s.
The net result, was a 36-card deck – a Short-Deck – and the outcome was incredible.
One of the problems that amateurs have when playing superior players, especially professionals, is they play with a broad range of starting hands because their primary focus in the game is to enjoy themselves, and you can’t do that if you fold. The better player begins with a narrower range of hands, and this disparity means the amateur ends up with the worst of it more often than the pro.
Folding isn’t fun.
Neither is losing all the time.
Paul and Richard found that by removing the lower half of the cards, they increased the likelihood that an amateur would receive two very playable starting hands.
As the former World Series of Poker (WSOP), Player of the Year, Ben Lamb, mentions during his first experience of Short-Deck during a 2018 Triton Poker Series in Jeju, South Korea.

“The first thing you notice when you sit down to play Short-Deck is the equities run much closer than No-Limit Hold’em.”

And the closer you get, the more often a weaker player wins, and the more likely he or she is to remain in the game. At a time when poker’s ecosystem is under pressure from advancements in technology and available poker resources, with players getting improving at a rate never before witnessed, Short-Deck is fixing a leak that is in danger of drowning the game.

The Rules of Short-Deck Poker

The variant featured in Triton Poker Series events is called Short-Deck, Ante-Only. There is no small or big blind, and instead everyone has to post an ante that increases each level in the same way blinds do in a standard game of No-Limit Hold’em. The player on the button posts a double ante.
Each player begins with three bullets.
Stack sizes can vary, but in the early events at Montenegro and Jeju in South Korea, each bullet was worth 100,000 in chips. And loading these three bullets into the chamber is important, as Ben Lamb explains.

“You have to put your stack in more often than the other games. That’s why they give you three bullets, that’s smart.”

Like No-Limit Hold’em, the player to the left of the button begins the action by calling the size of the double ante, raising or folding. The action continues in sequence as per No-Limit Hold’em rules. Post flops actions plays the same.
Here’s Ben Lamb again to give you a few tips.

“You need to see a lot of flops. There are more passive ways to play the game, like limping, but this an action game. Stay away from dominated hands. Recognise the difference between shallow and deep-stacked play.”

During the early action, you can be forgiven for thinking you have walked into a game of deuces wild. All-in and calls are common, the action is crazy fast, and there is a lot of laughing and joking around the tables. But once the game gets deep, you need to switch gears, and this is why the game suits both skilled and weaker players alike.
And the best thing about Short-Deck is it’s a new game. It’s perfect for local home games where you can experiment with the rules and formats, while keeping an eye on the Triton Livestream to see how the Godfathers of the game continue to evolve. 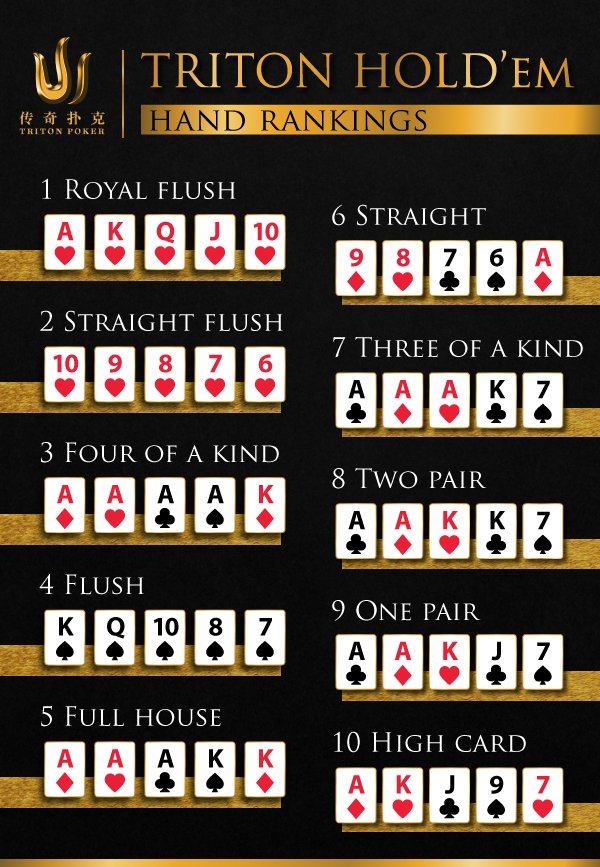 Royal flush
Straight flush
Four of a kind
Flush
Full house
Straight
Three of a kind
Two pair
One pair
High card
It’s important to remember that a flush beats a full house. That’s the only hand ranking difference when compared to No-Limit Hold’em.
One of the features of Short-Deck, is unlike Pot-Limit Omaha (PLO) where players have to learn to use four hole cards, Short-Deck is more suitable for people who have grown up playing the more familiar No-Limit Hold’em.
A few things to note:
Pocket aces come along 1 in 105 hands, not one in 220, but they are cracked way more often.
Straight draws arrive on the flop 48% of the time, not 31%.
The odds of flopping a set are 18%, and not 12%.
The other change to be aware of is the role of the ace. As in No-Limit Hold’em the ace plays both low and high when creating straights, meaning it becomes a five when 6,7,8,9 is on the board.

After playing Short-Deck in their local home game, and seeing the improvements in sociability and joy firsthand, both Paul and Richard decided to test the new variant at a professional level.
The Triton Poker Series was born.
Taking place in some of the most salubrious destinations around the world, the Triton Poker Series is a high stakes series that pits some of the wealthiest amateurs against the very best professionals in the game.
In 2018, at the Triton Poker Series at the Maestral Resort & Casino in Montenegro, Paul and Richard hosted a HKD 250,000 (USD 32,000) and a HKD 1,000,000 (USD 127,000) buy-in Short-Deck, Ante-Only event, put the word out, and hoped they would come.
Come they did.
The most feared and respected poker player in the modern game, Phil Ivey, beat 61 entrants to win the HKD 4,749,200 (USD 604,992) first prize in the HKD 250,000 (USD 32,000) version, and Jason Koon defeated 103 entrants to bank the HKD 28,102,000 (USD 3,579,836) in the HKD 1,000,000 (USD 127,000) version, in only his second ever Short-Deck event.
Not only did the amateurs love the game, so did the pros, and so did the poker community, who tuned in to watch the livestream in their droves. There had not been this much buzz over a format of poker since the Texas Road Gamblers decided to add the words ‘All-In’ to the game of Limit Hold’em.
Paul Phua and Richard Yong had achieved the remarkable.
Short Deck became the antidote to a game that was in danger of turning into a robotic, emotionless, and dull experience.
“People who fold too much are going to get eaten up, you have to be prepared to gamble,” Ben Lamb.
But how do you play this game?

The Future of Short-Deck Poker

The Triton Poker Series Livestream numbers show that this is a variant of the game that the poker community adores. It turns quite a boring spectator sport into one of the most illuminating.
All sports and games have their magic moments.
The goal.
The punch.
The all-in and call.
There are more swings than a kid’s playground, and for this reason, Short-Deck poker is going to be here to stay, but where does it take it’s seat in poker’s landscape.
Back to Ben Lamb.
“It will grow, especially in America. I am going to try and help that happen by running games at ARIA and my local game in LA,” says Lamb, who played the variant in Jeju, for the first time, and fell in love with it. “It fits a niche. Amateurs want to enjoy themselves. Pot Limit Omaha cash games tend to be more fun for amateur players, but Short-Deck takes it to another level. More gambling. More fun. The edges are smaller, and that’s a great thing for the long term ecosystem of poker. Just because your a pro it doesn’t mean you don’t like to gamble. I love to flip and gamble.”
Poker’s purpose is to enthrall, enlighten and entertain.
Somewhere along the way we forgot that.
Short-Deck won’t let us make the same mistake twice.
Suddenly, it feels like poker has no problem at all.